The incredible wealth of talent behind Band of Brothers

Back in 2001, HBO screened Band of Brothers for the first time.  Recently it was picked as HBO's best original programming ever.  Created as a sort of expanded version of Tom Hanks and Steven Spielberg's seminal Saving Private Ryan and based on the Stephen Ambrose book, Band of Brothers was created in part by Erik Jendresen (most famous in recent years for nearly creating new Star Trek movies before JJ Abrams got to them) and Graham Yost (most famous recently for the TV series Justified, but immortal as far as I'm concerned for Boomtown, a brilliant mosaic of crime).

Here's a listing of the powerhouse acting talent to be found in Band of Brothers:

Here's my list of favorite books I read in 2019.  As I don't read a lot of new releases, most of these will be older, in some cases quite a bit older, than what you typically find in these lists...

I spend all year writing extensive reviews over at Goodreads, and then I write the bare minimum here...At least I know about as many people are likely to care one way or the other!
Posted by Tony Laplume at 1:43 PM 2 comments:

Alfred Hitchcock's The Best of Mystery: What Happened to Each Writer? 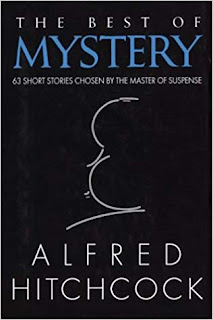 I just finished The Best of Mystery, culled from Alfred Hitchcock's Mystery Magazine in 1980, the year Hitchcock died.  I thought it'd be interesting to excavate the careers of the writers included in the collection.  There are some names even someone like me who doesn't read a lot of mysteries will know, and then some that require a little more digging.  So let's begin!

Henry Slesar ("You Can't Blame Her," "Happiness Before Death," "Case of the Kind Waitress") Wrote teleplays for Alfred Hitchcock Presents, among other projects.

Pauline C. Smith ("A Flower in Her Hair," "Linda Is Gone") Limited to Hitchcock publishing ventures.

Avram Davidson ("The Cost of Kent Castwell") Celebrated by hobbyists but never really broke out.

Lawrence Block ("Pseudo Identity," "With a Smile for the Ending") Wrote extensively, dozens of novels under a variety of names.  Easy to find.

Jack Richie ("That Russian!," "The Third Call," "#8") Later refined his name as Jack Ritchie; worked for Alfred Hitchcock Presents, had a short story adapted into a movie starring Walter Matthau.

Hillary Waugh ("Galton and the Yelling Boys," "Nothing But Human Nature") Dozens of novels, easy to find.

F. J. Kelly ("The Vietnam Circle") This particular name did not leave a legacy.  May have been modified later.

Ed McBain ("Sadie When She Died") Extensive work, easy to find, was once adapted by Akira Kurosawa.

Borden Deal ("A Try for the Big Prize") His stories inspired work in both Broadway and Hollywood.

Robert Colby ("Voice in the Night") Never really broke out.

Donald E. Westlake/Richard Stark ("Never Shake a Family Tree," "Just a Little Impractical Joke," "Come Back, Come Back...," "The Best-Friend Murder") The second most accomplished of the writers in the collection, with an extensive list of Hollywood adaptions to his credit, including recent examples Payback (1999), What's the Worst That Could Happen? (2001), and Parker (2013).  Probably better known recently as Richard Stark, creator of Parker, a character who has appeared in many films, often renamed, until the most recent one.

James Michael Ullman ("Night of the Twisters") Best known for How to Hold a Garage Sale.

Patricia Highsmith ("Variations on a Game") The writer of The Talented Mr. Ripley, plus Strangers on a Train (later adapted as a Hitchcock movie) and what came to be known as Carol (also made into a movie).  Easily the most accomplished of the lot.

Rufus King ("Damon and Pythias and Delilah Brown") Wrote a number of books.

James Holding ("Once Upon a Bank Floor," "The Montevideo Squeeze") Remains fairly obscure.

Wenzell Brown ("Death by Misadventure") Born in Portland, ME (of interest mostly to me), had some work adapted by Hollywood.

Mary Barrett ("One for the Crow") Daughter of Irving Berlin.

Kate Wilhelm ("A Case of Desperation") Well respected for her science fiction work.

Paul Tabori ("An Interlude for Murder") Better known for other pursuits.

Comic Strips Worth Checking Out

People have been declaring the death of the comic strip since at least Calvin & Hobbes ending in 1995 (nearly a quarter century at this point!), in part thanks to Calvin's own creator, Bill Watterson, who famously complained about the diminishing space accorded strips in newspapers and the resulting lack of artistic ambition.  I previously set out to explore what there was worth reading in a post that became one of my most popular here, but that was some time ago at this point, and so here's an update.

Part of the problem comic strips have is, of course, that newspapers themselves are no longer touchstones of family life.  I myself tend to read papers only when they've been made available by someone else (my dad, who still reads them every day; a good reason to stay at a hotel is for their free copies), so my experience of both them and recent comic strips in general is sporadic.  That doesn't mean strips aren't worth reading today.  A local carrier either misdelivered a paper last week or was attempting to drum up business, but at any rate I found myself reading strips again, looking to see if there was anything worth noting, and there was, as it turned out.

That's Macanudo, a comic strip created by Liniers that's been published in Argentina since 2002 but recently (September 2018) made the leap into English language papers.  Obviously equipped with unique origins, it also reshapes the idea of comic strips into a recognizably modern style.

You don't need to reinvent the wheel to stand out, though.

﻿
That's Sally Forth, a strip that has technically existed since 1982, but has successfully reinvented itself, with an evolving pool of creators, over the years, with the current team (writer Francesco Marciuliano and artist Jim Keefe) in place only since 2013.  The best element of this one is Ted Forth, who frequently seems like he hails from some alternate dimension, but in recent years lost his dad and has settled a little more into reality.  He seems almost as if he were a grownup Calvin.  Ted and Sally's daughter Hil is sort of a mix of her parents, although she seems closer to Ted.  Sally's biggest quirk is her annual eating of the ears off Hil's chocolate Easter bunnies (a scant few months away!).

Pearls Before Swine is the current gold standard.

Red and Rover has always struck me as a pleasantly gentle version of Calvin & Hobbes. 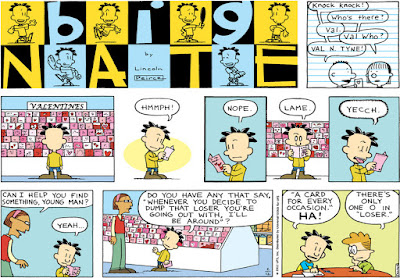 Big Nate has taken on much more visibility in recent years thanks to making the leap into books akin to Diary of a Wimpy Kid.

Zits has consistently excelled on art.

﻿
Over the Hedge became an animated movie way back in 2006.  Still in newspapers, if you can find it.

FoxTrot has gone into semiretirement.  You can only read new strips on Sundays now.  (I recently watched the whole Indiana Jones movie series; this strip seemed appropriate.  Plus there's going to be a fifth entry soon; I expect that walker to actually be in it.)
Posted by Tony Laplume at 6:42 AM No comments:

Posted by Tony Laplume at 5:33 PM No comments:

Orson Welles' War of the Worlds

Last Monday was the 80th anniversary of Orson Welles' famous radio version of War of the Worlds, when listeners became convinced that an alien invasion was actually occurring.  That was October 30, 1938 (the same year Superman debuted, incidentally).  How innocent the past seems!  But radio was the entertainment medium of the day.  The first Hollywood blockbuster, as we would understand it today, was released only the year previous, Snow White and the Seven Dwarfs, and the year following, Gone with the Wind.  TV hadn't really happened yet.  Popular serialized storytelling played out in radio dramas.  That's where the Shadow made his reputation, where the phrase "Only the Shadow knows" comes from, and why it's something people still remember, because every episode ended with it.  Families would gather around the radio the way they would TV later.  (Forget about such things these days, I suppose...)

Anyway, real panic ensued from Welles' production.  And today, that seems completely inconceivable.  We've truly lost all context.  It seems like an M. Night Shyamalan movie, where we discover in the twist ending that nothing was what it seemed.

So naturally it would make a great movie, trying to explain it today.  Welles directed Citizen Kane three years later, 1941, and the controversy behind that production was entirely different, but it also drastically affected the course of his life and career, and in the process helped make him an endlessly fascinating figure in history.

Today if we talk about Welles it's almost invariably about Kane, or about how his career was affected by it.  I imagine it would be equally inconceivable to anyone alive in 1938, who listened to his War of the Worlds, who believed in an actual alien invasion, for his reputation not to include that moment, rather to be defined by that moment.

So a movie would also help reclaim that moment.  And don't get me wrong.  I don't want a movie about the production, but about the broadcast, a juxtaposition of Welles putting it on and listeners actually believing it, about the sheer panic.

And that's how you begin to reclaim history.
Posted by Tony Laplume at 7:47 PM 2 comments:

﻿
Recently I finally got a copy of Alan Doyle's 2017 album Week at the Warehouse.  Doyle has been a favorite of mine since I first heard his Newfoundland band Great Big Sea in the fall of 1999.  I had just started college and the band was booked as part of the freshman class's initiation festivities.  What luck!  Great Big Sea was a Celtic folk rock band, creating its unique interpretation of traditional songs while building a catalogue of its own.  Somewhere along the way Doyle became friends with Russell Crowe and started showing up in his movies.  Arguably the culmination of that was Doyle being cast as Alan-a-Dale in 2010's Robin Hood, becoming instantly, perhaps, the most authentic person to play the role in modern times.  He composed the ditty "Bully Boys" for the film.  And somewhere along the way, the song took on a life of its own.  Here's a sampling of interpretations, including a few with Doyle himself singing:﻿

Even the Wikipedia page for Doyle's album is convinced "Bully Boys" is a traditional.  The truth is, the song's long legs is fine testament to just how perfect his casting for Alan-a-Dale really was.  I'm glad he finally made a recording of his own, and that I've finally added it to my collection.  Recently, having become aware of the phenomenon, I began committing the chorus to memory, and have been singing it.  Maybe I'll record myself singing it, too...
﻿
Posted by Tony Laplume at 1:33 PM 2 comments:

Tony Laplume
Born in 1980. Graduated from college in 2003. Have written various things.